STP introduction and how to set up STP on VigorSwitch

DrayTek VigorSwitches support STP/RSTP/MSTP which allows switch redundancy as well as preventing loops at the same time. This article introduces how STP works and how to set up STP on a DrayTek VigorSwitch. A typical topology where STP can be used is shown here where we have 4 VigorSwitches and a redundant path between the switches for failover.

Spanning Tree Protocol(STP) is a management protocol that works on Layer 2 of the OSI model. The main purpose of STP is to detect and prevent the switch from the Broadcast Strom caused by using the Redundant Path mechanism. However, the network convergence process of STP is a slow process. RSTP speeds up the network convergence process. But RSTP has a flaw same as STP, that is, Load Balance can not be implemented among VLANs. And MSTP not just fasts the network Convergence, MSTP implements load balancing among VLANs. Note: The process of each port to change the status, we call it Convergence. 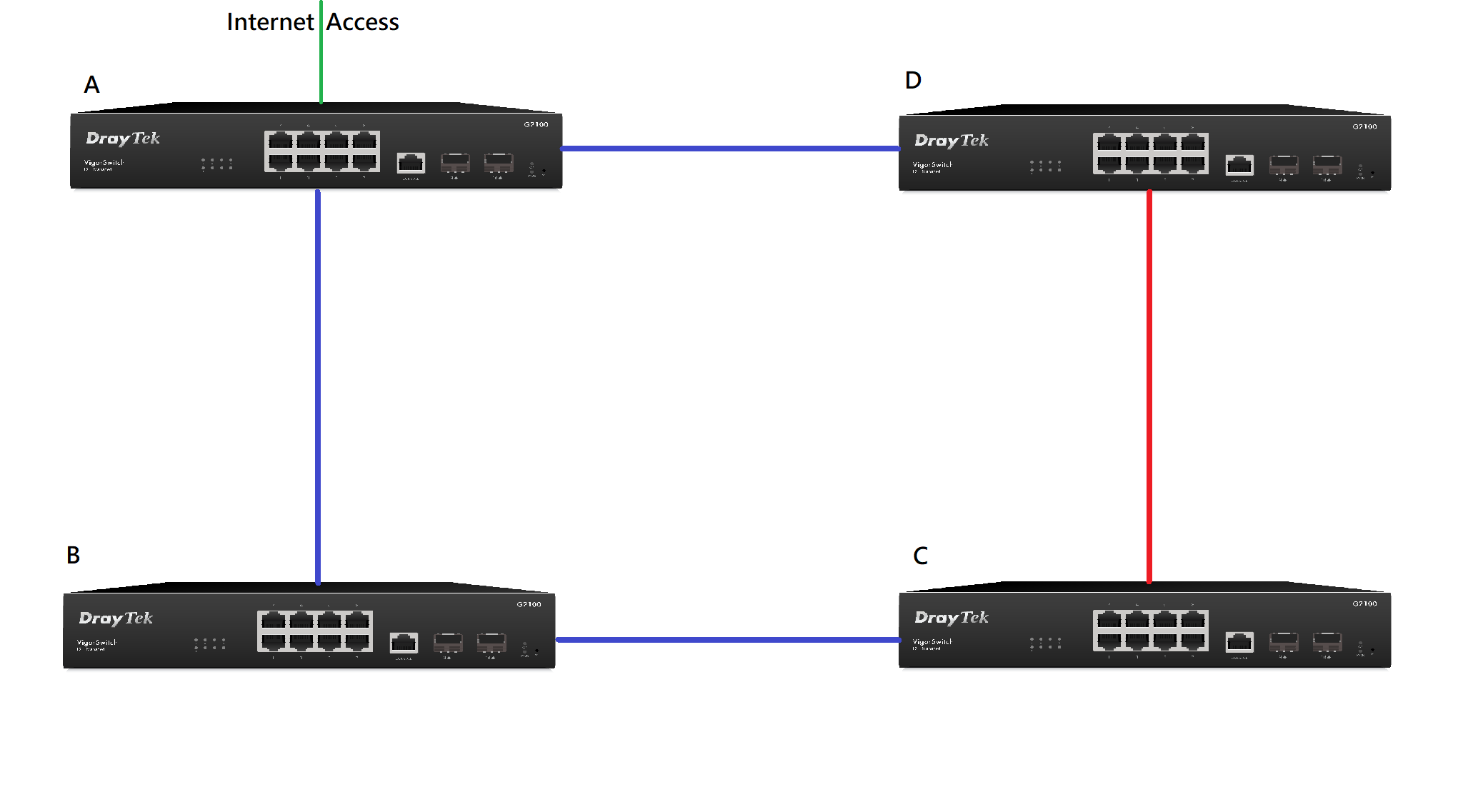 When STP is enabled, the redundant path in the network topology shown by the red line will be blocked to prevent loops. If one of the other links shown be the blue lines goes down, then the redundant link (red line) will come up to provide continuity in the switch network.

Rapid Spanning Tree Protocol (RSTP) is an enhancement of STP which responds to Bridge Protocol Data Units (BPDU) from the direction of the root while STP cannot. It provides rapid convergence of the spanning tree.

Multiple Spanning Tree Protocol (MSTP) is a further enhancement to RSTP which enables VLANs to be grouped into a spanning-tree instance, providing multiple forwarding paths for data traffic, and enabling load balancing.

Bridge Protocol Data Unit (BPDU) contains the information to configure and maintain the spanning-tree topology, includes the port attribute, MAC address, priority, and path cost. Vigor Switches running STP, RSTP, MSTP exchange BPDUs to calculate a loop-free topology. During the deployment of a spanning tree protocol, the edge ports do not participate in the calculation of the spanning-tree and able to transition from the Disable status to the Forward status immediately. This way, the edge ports could prevent the switches from re-calculate due to frequent online and offline, to improve network reliability.

Root Switch: The lower the value(Bridge ID), the higher the priority 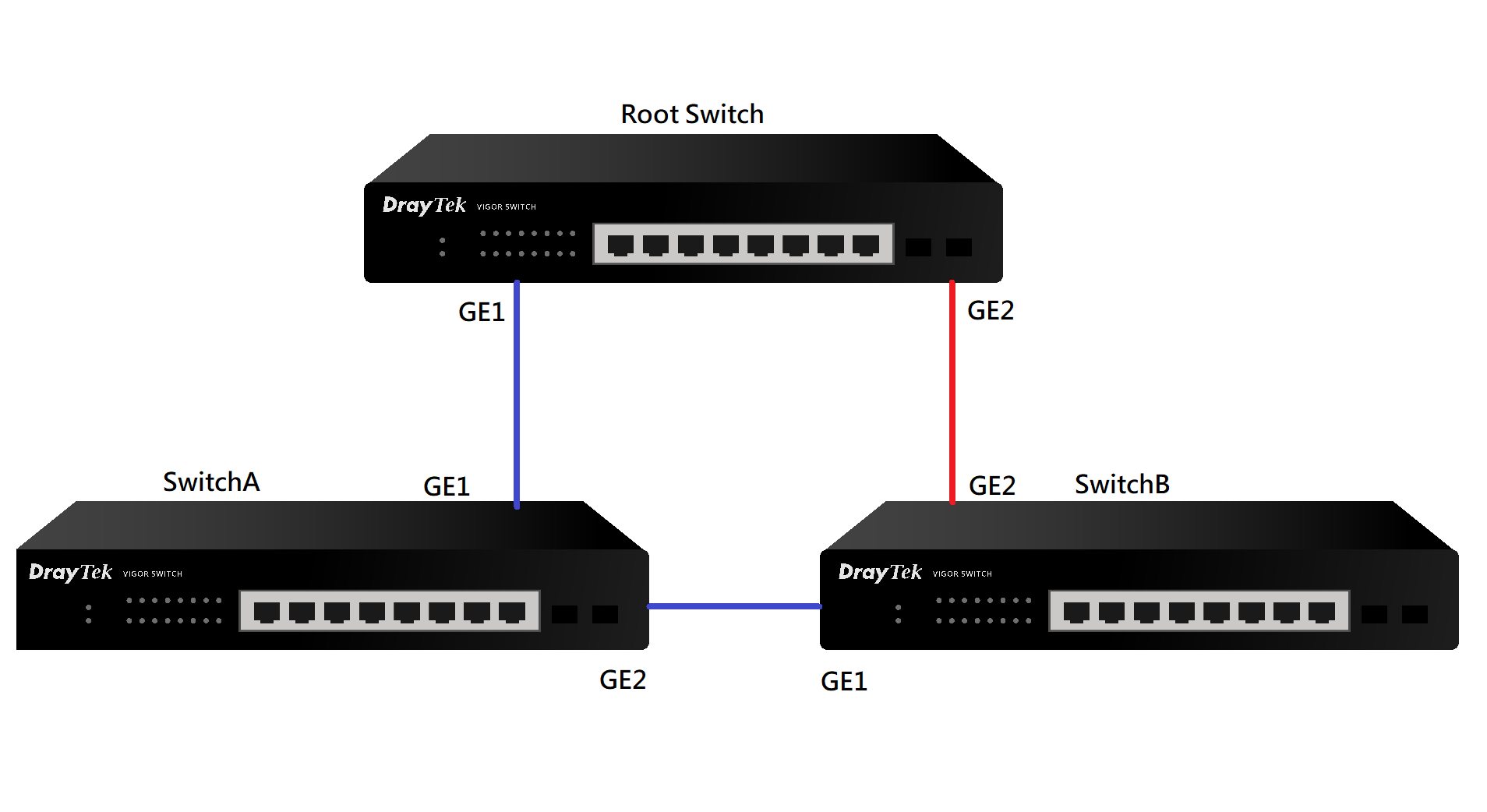 How to set up STP on VigorSwitch

We will use the topology shown in the diagram below to show the steps to set up STP in on VigorSwitches.

In this switching network the red link will be blocked to prevent a loop. If the BC link goes down, the CD link will come up to allow Switch to continue having internet access. In conclusion, Switch A should be the Root Switch.

a. Go to Switch LAN >> STP >> Properties, and enable STP on all VigorSwitches.

After about 1 minutes STP caculation, STP is working now. We could check the Port Role at Switch LAN >> STP >> Port Advanced Setting

After completing phase1 configuration, STP will now be working on the network, but we haven't configured the path to meet the topology as shown in our diagram. The following steps will show you how to set up the STP path

b. After configuring Path Cost, go to Switch >> STP >> Port Advanced Setting, we can see the Port Role is Alternate and the Port State os Discarding on GE4

c. After the steps above, the STP meets the topology now.